To all our lovely camping guests, we had no choice but to close our Feather Down campsite for the whole of April.  We will reopen when allowed and will review on a monthly basis.  Rest assured as soon as we can we will be open for business.

For information on your bookings please contact Feather Down Farm Days 01420 80804.  Sending you all our very best wishes, please stay safe and we hope to see you all soon.  From all of us at Manor Farm.

Unfortunately one man’s loss is another sheep’s gain. 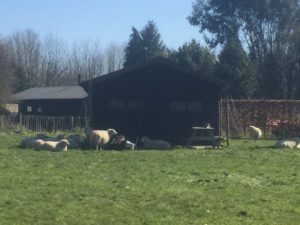 A lot has been said about farming and climate change. For years some have argued against the scientific evidence but with 98% of scientists being convinced I tend to believe them especially as it have such a huge impact on what I do.

The general consensus is that world farming has contributed hugely to the emission of climate changing gases. Figures often used attribute 10-20% of all greenhouse emissions worldwide (12 billion tonnes of CO2) could be attributed to farming. As a rule most farmers regard their primary role as a food producer for the world but morally how do we up our production to feed a growing population and also reach the target of Net Zero emissions by 2040?

At present it is beef and milk production that are coming under the worst scrutiny. Certain pressure groups tell us that the methane producing cows are a massively wasteful way to produce food compared to vegetable and plant based food. Beef and dairy can produce up to the equivalent of 7.5tonnes of C02 for every hectare grazed. This could account for 15 million tonnes in the UK alone.Alarming I know but let’s look at the stats for crop production (veg and combinable crops) which can produce up to 7 tonnes of CO2 per hectare. Less you might be thinking but there is considerably more land under arable production in the UK so this would amount to over 18 million tonnes.

These are eye watering figures and could be a reason to panic which is what some pressure groups want us to do. The important words here are ‘up to’ and if we look into the matter in a bit more detail we can find hope.

These figures do not take into account the ‘method of farming’. The beef and milk figures are based on intensive systems used more widely elsewhere in the world e.g beef feedlot or mega dairies, whereas most of UK production is based on grazing systems. On the arable side the figures assume all land is ploughed which can release up to 90% of the total CO2 emissions from the soil itself. A lot of farms including us and our neighbouring farmers now use either minimal cultivation or zero till to plant crops. Both these examples have the potential to reduce the emissions by at least 2 tonnes of CO2 per hectare. Ironically organic farming releases more CO2 because they use the plough method more but they do mitigate this by using less fertiliser and herbicide.

Whilst this article is not full of the joys of spring after a very wet winter what I do want to convey is that when you read statistics on climate change and who is to blame there is more to the story.

I as a farmer feel comfortable that in some cases we should take a share of the blame but I am also proud and excited by the fact that farmers are taking the issue seriously and are leading the drive for change by using more holistic methods as well as new technology.

Who knows in a few years’ time, rather than being the villain we might be heroes and I think UK farmers are already well on their way. 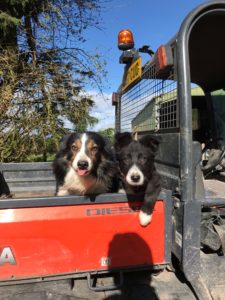 Meg now 5  months old and owned by Luki.  She is already helping out on the farm, although Jim does not always see it like that.